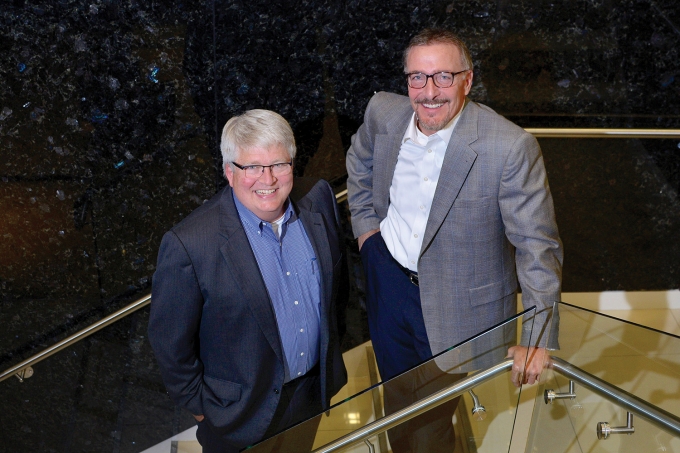 Grand Rapids, Mich.-based Tillerman & Co. announced it acquired Jackson Flexible Products from its founder, Ronald Jakubas, who started the company in 1969 to supply Aeroquip Corporation, now a division of Eaton Corporation. Jakubas, who plans to retire, met with several strategic buyers that were interested in consolidating Jackson Flexible’s operations into their own locations. Instead, Jakubas chose to sell to Tillerman & Co. because they were committed to keeping the company in Jackson. 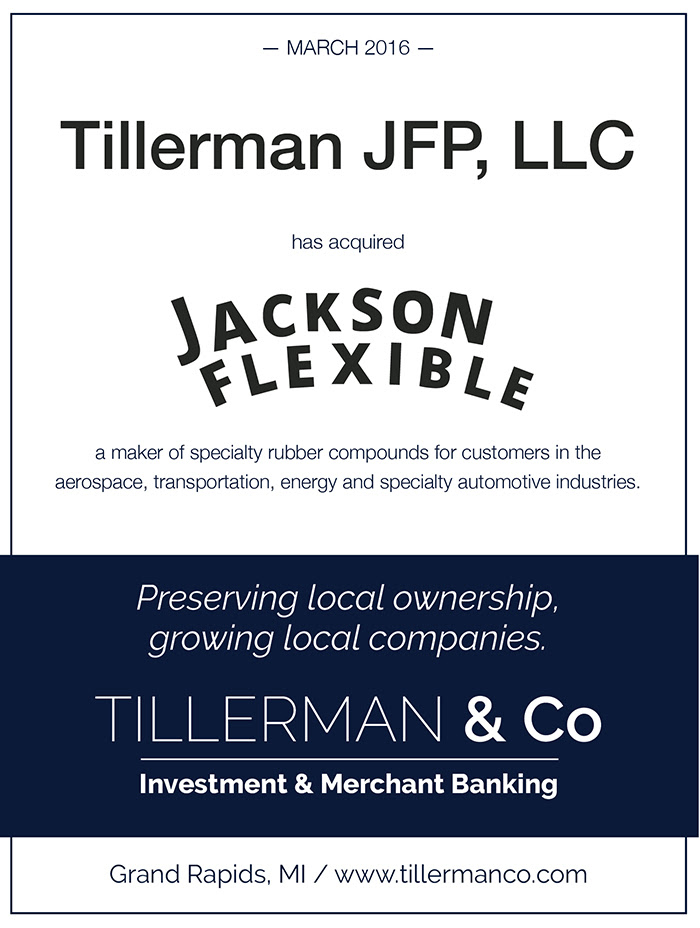 “We are pleased to keep jobs in Michigan and preserve the heritage of this exceptional manufacturing business,” said Tillerman Partner Remos Lenio. “For nearly a half-century, Jackson Flexible has been designing specialty compounds and high-performance parts for customers with the most stringent specifications, including FAA-certified applications. We intend to build on that tradition by bringing Jackson Flexible’s expertise to new customers in the medical, oil and gas,rail, energy and other industries.”

Jackson Flexible supplies more than 3,500 parts to more than 120 customers across a variety of industries. The majority of Jackson Flexible’s parts use proprietary formulations that meet the most demanding performance standards for temperature tolerance, flexibility, chemical resistance and appearance.

Tillerman partnered on the transaction with Jackson Flexible’s general manager Timothy Dickerson, who will serve as chief executive officer of the company under the new ownership. A chemist, Dickerson also brings 15 years of technical sales experience to his new position. He also served as vice chairman of the American Chemical Society’s Rubber Division and serves on the advisory board of Ferris State University’s respected Rubber Engineering Technology program. Dickerson is a graduate of Aquinas College in Grand Rapids.

“We are excited to work with Tim and the entire team at Jackson Flexible Products,” said Tillerman Partner Philip Blanchard, CFA. “We plan to invest in R&D, new equipment and marketing so we can bring new opportunities for growth to our employees, customers, suppliers and the Jackson community.”

“In many ways, this initial transaction epitomizes our acquisition strategy at Tillerman & Co.,” Blanchard said. “We plan to find other middle-market and lower-middle market companies that we can help develop and grow, while also preserving the legacy of their founders and keeping the jobs in the Midwest. Our deal with Jackson Flexible is just the beginning.”

In addition to its industry focus, Tillerman & Co. intends to pursue engagements with company owners who are preparing to sail off into retirement. Over one-third of mid-market sellers expect M&A activity will increase over the next few years as more owners reach retirement age, according to a report by Providence, R.I.-based Citizens Commercial Finance.

For many of those Baby Boomer-aged owners, there’s a growing concern related to legacy issues, succession planning and losing key employees, according to Tillerman partner Lenio.

“We have seen an increasing number of owners interested in selling their company to a buyer who will maintain the jobs, culture and connection to the community where the business was built,” Lenio said. “We intend to guide owners through transactions that will preserve the company’s heritage and maintain local jobs, while maximizing their returns.”

Lenio and Blanchard are known throughout the midwest for their M&A advisory and investment banking work. The pair, who first met three decades ago as undergrads at Central Michigan University, have worked both the buy-side and sell-side on more than 200 successful mergers, recapitalizations, buyouts, acquisitions and turnaround transactions. Prior to founding Tillerman & Co., they were partners at a turnaround and consulting firm in West Michigan.

Lenio holds an MBA from the Ross School of Business at the University of Michigan. He is a founder and past director of the Association for Corporate Growth’s Western Michigan chapter and also serves on the board of MiQuest, a statewide organization that promotes entrepreneurship in Michigan. He is also a member of the Grand Rapids Public Library Foundation board of trustees and serves on the board of the Venture North initiative of the Traverse City Chamber of Commerce.

Blanchard, a Chartered Financial Analyst, earned an MBA from the Columbia University Business School in New York City. He serves on the board of directors of the West Michigan Humane Society and volunteers for a variety of West Michigan organizations including Junior Achievement and the Grand Rapids Home for Veterans.